So what’s going on when a battery dies? Well, it’s all about chemistry. Batteries, like so many things in our world, rely on a chemical reaction in order to work.

First, we have to understand the chemistry behind how a battery works to ultimately understand why it stops working. A battery starts to die the second it leaves the factory since the chemical reaction that produces electricity is already under way. Although the process by which batteries produce electricity is slightly different between types, i.e. lithium ion rechargeable battery versus a standard dry cell battery, the basic chemical reaction is the same. A battery converts stored chemical energy into electrical energy through a chemical reaction involving a cathode (positive electrode) and the anode (negative electrode) surrounded by an electrolyte. In a dry cell battery (such as AA, AAA, C, D, etc.), zinc is the anode, graphite is the cathode, and ammonium chloride (NH4Cl) paste acts as an electrolyte in between the anode and cathode that ions travel through. For rechargeable lithium batteries, the anode and cathode are slightly different. The cathode is generally lithium iron phosphate (LiFePO4) and the anode is graphite with a variety of electrolytes.

When batteries are new, or charged up in the case of rechargeable batteries, lots of tiny particles called ions are moving about between the anode and cathode. While this chemical reaction may sound complicated, it’s actually very simple: The anode combines with the electrolyte to form a compound producing ions and free electrons, and the cathode captures the electrons forming a conductive path. The back and forth flow of ions between the anode and cathode lead to a conductive path for the free electrons that produces electricity. The battery will continue to produce electricity until one or both of the electrodes run out of chemicals necessary to sustain the reaction. Since no chemical process can go on forever, the batteries ability to produce energy slows down over time due to an electro-chemical change in the anode and cathode that eventually causes them to stop providing electrons which is how a battery “dies.” 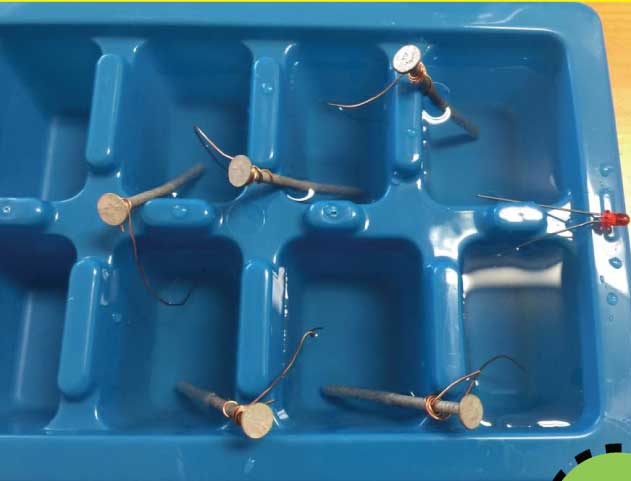 This battery is made of two metals (zinc and copper) that are “suspended” in an acidic solution (vinegar). The two metal components are electrodes, where moving electrons enter and then leave the battery. The moving electrons flow from the wire bridge (copper), across the vinegar, to the nail (zinc), and then along the bridge to the vinegar and so on. Once the Ice-Tray Battery is connected to the LED, you create a “complete” or closed circuit and you’re rewarded with a glowing LED.

One thought on “Why do batteries get used up and go dead?”