The highest point on Earth is the peak of Mt. Everest, 29,029 feet (8850 meters) above sea level. At this elevation, the atmosphere is thin compared to at sea level. Pictures taken from the top of Everest on a clear day distinctly show that the sky is darker, blacker than at lower elevations. 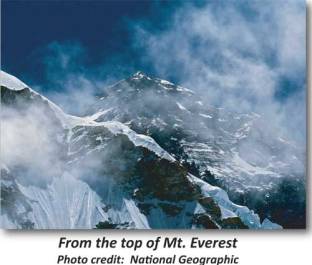 The brightness of Earth’s daytime sky results from its atmosphere scattering sunlight that otherwise would travel in a straight line. As sunlight passes through Earth’s atmosphere molecules of nitrogen and oxygen gas and to a lesser extent dust particles cause some light to scatter (bounce) in random directions. Some of this light scatters towards the Earth’s surface; some bounces back into space. The net effect is that we see light coming from all parts of the atmosphere, illuminating Earth’s daytime atmosphere. This illumination washes out all of the stars (except the Sun of course). The sky appears blue because blue light scatters more strongly than green, yellow, orange, and red light.

The brightness of the sky above an observer depends on how much atmosphere the Sun’s light has to filter through. As we increase in elevation, the sky becomes darker. If we were in space itself, the sky (except for where the Sun’s located) would be pitch black and we would see the stars even in the daytime. However, I have neither heard nor read reports of climbers even on Mt. Everest’s summit seeing the stars. I have not been to Everest’s summit myself, so I don’t know for sure whether stars can be seen from there during the day. The pictures I’ve seen leave me with the impression that the sky is still too bright to

see stars during the day.

Light Scattering
Light travels in straight lines until reflected or scattered by objects in its path.

We “see” the world by collecting light that enters our eyes. This means that if no light enters our eyes from a particular direction, we perceive that direction as dark. For example, in a room when the lights are turned on, there is usually no area that appears dark because the room is filled with reflecting objects (the walls and everything else) so that light is entering our eyes from all directions. We see light from the sun because it is reflecting off particles in the atmosphere.

What happens when you shine a flashlight up at the sky when it’s pitch black? You won’t be able to see the light from the flashlight, unless it happens to scatter off something like a tree or a cloud.