This is a good question, because snow and ice are both water in a frozen form. So, why do they feel so much different to us? Well, the answer is actually fairly simple, and it has to do with air. As snowflakes fall to the ground and begin to pile up, air is trapped in the empty spaces between snowflakes. You could re-create this by placing some decorative 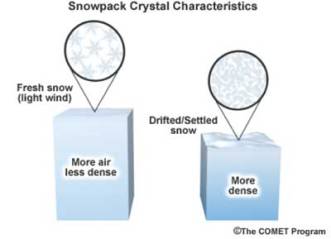 Here’s what this would look like under a microscope:

Notice the nearly perfectly shaped snowflake on the left. This is the fresh snow. But after the snow has been on the ground for a few days, that air gets squeezed out, and the old snow doesn’t even look like a snowflake anymore. If you looked at your hard snowball under a microscope, it would look a lot like this.

Now let’s look at this close-up of an ice cube. Notice there is almost no air inside of the ice and it looks solid. So, this is why ice feels hard.

As snowflakes fall through the sky , their intricate latticework form a sort of net for catching pollutants that may be in the atmosphere. So, snow really isn’t as clean as it looks.

There will be dirt collecting on the melted snow filter because every snowflake forms on a speck of dust or salt. As the snowflakes fall, they collect more dirt from the air.

According to snow research done at Brigham Young University, snow is safe to eat as long as it is fresh.