Tar is concentrated dead algal matter that is thicker than oil. Heat can change tar into oil. In the La Brea tar pits extinct mammals that died about 30,000 years ago are trapped in tar in Southern California. I don’t know of dinosaurs fossilized in tar.

Geologists use the word “asphalt” to refer to what most people call tar. Tar comes from bits of organic matter, called kerogen, preserved in sedimentary rocks. Kerogen represents the preserved bodies of microscopic organisms, such as diatoms, that live suspended in the upper few yards of the ocean. The combined effects of heat and time slowly converted the soft parts of the diatoms into asphalt. Tar pits form when asphalt seeps to the surface through fissures in the Earth’s crust.

The heat of ancient Ice Age summers would have caused the asphalt in tar pits to become soft and gooey. The pits may have also been hidden beneath leaves and layers of dust. Animals could have easily wandered into pits by accident. When it rained, water covered the tar. Animals came to the pools to drink and got stuck in it. At other times they may have been chased into the pits by predators and become stuck.

After dying in the tar pits, the skin, muscles, fur, feathers, and other soft parts of trapped animals decayed, whereas the bones and teeth remained intact. The bone in particular soaked up asphalt into its pores, thereby aiding in its preservation. Unlike most fossils, those from the tar pits are unchanged, original bone material. 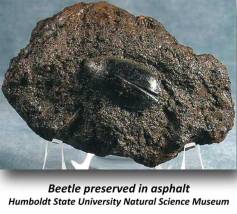 Preserved Organisms
Petrified fossils form when minerals replace all or part of an organism.
Unlike petrified fossils, tar and amber preserve the remains of the organism with little or no change.

Do this demonstration to make a physical representation of a preserved organism.

How does this model represent the tar that preserved organisms from millions of years ago?