We were watching a raven harass some songbirds who were eating bread at the side of the road while we were waiting for some road construction this summer. He didn’t try to eat the food; he just was chasing the songbirds who attempted to eat. It seemed he was enjoying himself. Just how smart are ravens and could he have just been entertaining himself?
Common ravens are one of our smartest birds, and yes, I believe it was enjoying itself. They have been seen sliding down snow banks on their backs. They fly barrel rolls in courtship flight. There is a wonderful book by a friend of mine, Bernd Heinrich, titled “Mind of the Raven.” I highly recommend it. 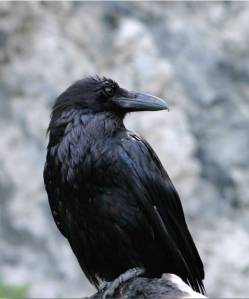 from “Mind of the Raven” by Bernd Heinrich
“In this book, I have tried to give a detailed picture of specific ravens I have known, and I explore the possibility that some of their behavior is derived from conscious choice. My emphasis and primary reason for writing the book, however, was to record original observations and the adventures that made them possible. ….

The more facts I learned about ravens, the more apparent contradictions I saw. Sometimes ravens went out of their way to pull the tails of wild wolves and eagles. At other times I saw ravens afraid of a mouse, and even a moth, a moving twig, and a turtle, and a pile of Cheerios. I saw territorial ravens spend over an hour trying to chase as many as eight others at a time away from their food. I also saw the same individuals later welcome others and share the same food….Individuals performed feats of insight and intelligence, while also behaving in nonsensical ways….In the latter part of the book I try to confront what intelligence is and how it relates to learning, innate responses and insight… I conclude that ravens are able to manipulate mental images for solving problems. They are aware of some aspects of their private reality, seeing with their minds at least some of what they have seen with their eyes.”

Ravens do not migrate. They stay in Idaho all year long. They feed on fruits, seeds, nuts, fish, carrion, small animals, food remains and garbage. They even dig in snow to inspect plastic bags with waste.

Ravens are known to steal the food of many birds and mammals, even from dogs. They can act in pairs: one individual captures dog’s attention, while the other steals its food. They also follow wolf packs for picking remains from their preys.
Let’s make a treat for a hungry raven.
HOMEMADE BIRD BALLS 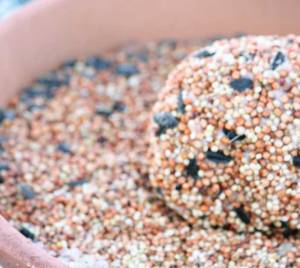